Canada’s Supreme Court decided that Canadians’ constitutional rights are violated by the criminalisation of assisted dying. Canada’s politicians are currently scrambling to come up with an assisted dying regime within the 12 month period that the Supreme Court gave them to fix the problem.


In many countries, including Canada, conscientious objection clauses protect – mostly - health care professionals from being forced to act against their individual ideological convictions. I suspect it isn’t unfair to note that these protections in the real world are nothing other than protections for Christian doctors who are unwilling to deliver services they would be obliged to deliver to patients who are legally entitled to receive these services, were it not for their religiously motivated objections.(2) Secular health care professionals could arguably avail themselves of conscience clauses, but in a liberal democracy, what reasonable conscience based cause could they have to refuse the provision of health care services to patients? Conscience clauses today are by and large a concession of special rights to Christian health care professionals, at least in secular Western democracies.


An uneasy compromise is often struck that stipulates that conscientious objectors must not be forced to deliver the health care services that they object to, but that they must ensure that patients will be transferred to a health care professional willing to provide the requested service. Typically they are prohibited from engaging in activities aimed at persuading the patient to see the errors of their ways. Typically they must also transfer the patient in an expeditious manner to their more obliging colleague.


Looked at from a conscientious objector’s perspective, this compromise is anything but a compromise. If I object to abortion because I believe that abortion is akin to murder, as Christian objectors happen to believe, surely my moral responsibility is barely smaller if I knowingly pass a pregnant woman looking for an abortion on to a colleague who will commit the act rather than if I do it myself. Christians are not typically known to see these issues through a consequentialist analytical lense, but even from their perspective, moral responsibility is barely reduced by the compromise. I sympathise with their objections to the compromise, because it is not a compromise. A compromise under the circumstances arguably is not feasible to begin with.


Patients are entitled to receive uniform service delivery from health care professionals. They ought not to be subjected to today’s conscientious objection lottery. The Canadian Medical Association proposes that Canada ought to establish a website where patients can ascertain where the nearest non-objecting doctor is located.(3) One difficulty with this proposition is that in many rural areas there might be only one doctor and the next – more obliging - health care professional might actually be a flight away. Nothing would stop us from taking this proposal to its absurd logical conclusion: why not establish comprehensive websites where patients can find out whether their doctor objects on grounds of conscience to treating sexually active gay patients, or perhaps whether their conscience prohibits them from treating patients of a particular objectionable ethnicity. Consequentialists might well decide not to treat Ebola Virus Disease patients because of the risk involved, call it their consequentialist conscience. Health care service delivery would soon become a random event, entirely based on the vagaries of conscientious objections. Incidentally, Canadian doctors’ legal conscience protections do not actually cover these kinds of objections, because really these protections are designed to protect Christian doctors’ convictions, despite feeble attempts at giving them a lick of neutrality paint. The odd thing about conscientious objections is that there is no way to find out whether they are genuine or just a matter of convenience. Even if they were genuinely held beliefs, why should that constitute a sound reason for refusing service delivery?


The very idea that we ought to countenance conscientious objection in any profession is objectionable.(4) Nobody forces anyone to become a professional. It is a voluntary choice. A conscientious objector in medicine is not dissimilar to a taxi driver who joins a taxi company that runs a fleet of mostly combustion engine cars and who objects on grounds of conscience to drive those cars due to environmental concerns. Why did she become a taxi driver in the first place? Perhaps she should have opened a bicycle taxi company instead. I recall well, during an extended teaching stint in a dental school, that in every intake there were a fair number of dental students mentioning that they settled on going to dental school rather than medical school because of their objections to abortion. That seems a much more reasonable decision than to join a medical school and cause throughout one’s working life problems for patients seeking medical care for health issues that they are legally entitled to receive medical care for and that one objects to for one reason or another. Societies ought not to prioritise individual ideological commitments of some health care professionals over patients’ rights to receive professional care in a timely and hassle free fashion. Dying patients living in rural areas should not be subjected to an access-to-assisted-dying-lottery caused by conscientious objectors. Doctors are first and foremost providers of health care services. Society has every right to determine what kinds of services they ought to deliver.


That a doctors’ lobby organisation such as the Canadian Medical Association should aim to prioritise its members’ interests over patient access to care is not terribly surprising, albeit disappointing. Canadian legislators would do well to ignore its plea on this occasion.

The journal Nature has published a lengthy Commentary piece by a UK based sociologist on Bioethics (the field, not the journal). It's... 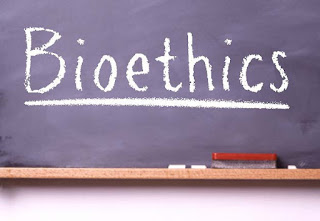