There is a big of an outcry in Canada over an Editorial by the current Interim Editor-in-Chief of the Canadian Medical Association Journal, Dr Rajendra Kale. Kale argues that pregnant women in Canada should not be provided with information about the sex of the fetus to avoid female feticide among Indo-Canadians. Kale proposes that women should only be told 30 weeks after conception to make it more difficult for them to have an abortion based on an arbitrary marker such as the sex of the fetus. Indeed, The Toronto Star newspaper reports that there is some empirical evidence suggesting a not insignificant gender balance in parts of the country: 'Though Canada does not collect statistics based on ethnicity at birth, population statistics show the country, now home to more than a million Indo-Canadians, has a skewed gender ratio. According to the 2006 census figures, nationally there are 932 girls to 1,000 boys under age 15 in the South Asian community, compared to 953 girls to 1,000 boys in the general population. The numbers in the South Asian community in the Toronto area are further skewed with 917 girls to 1,000 boys in the Toronto Central Metropolitan Area. Broken down further, it shows 904 girls to 1,000 boys in Mississauga, and 864 girls to 1,000 boys in Brampton.'

The gender imbalance itself is not really a great deal of concern in the country as a whole, the differential between the South Asian community and the general populations is a mere 20. Not exactly a dramatic figure. That doesn't mean that this differential is not higher in certain parts of eg Toronto, but in the big swing of things this isn't a dramatic situation. Baldev Mutta, a staff member in a Punjabi Community Health Centre notes in the Star that there is a preference among recent immigrants in favour of male off-spring. Women are reportedly threatened with divorce if they don't agree to to abort female fetuses.

It goes without saying that putting women under such pressures is unacceptable. It also seems, for most circumstances, bizarre to me that - recent migrant or not - anyone would have strong preferences for the sex of his or her off-spring. However, there can be at least some ethically unproblematic reasons, too. For instance, a family might have a preference for a 50:50 ratio among their off-spring and so decide to abort a male or female fetus in favour of a future child of the desired sex. Having knowledge of their off-springs sex sooner rather than later arguably is better overall, because the aborted fetus would be less advanced in its development. There could also be good health reasons for wanting to know, for instance in the case of sex linked genetic diseases.

My point is that it is unacceptable to view certain reasons for wanting an abortion acceptable and other reasons sufficiently dodgy that one chooses ('doctor knows best', it goes without saying!) which women will be told of the sex of their off-spring and which women must not be told. It is clear from the statistics quoted by Kale in his Editorial that the overwhelming majority of Indo-Canadians do not actually choose abortions based on the sex of their off-spring. Preventing them -and anyone else -for that matter from knowing the sex of their off-spring is plain offensive. No wonder that a woman from such a cultural background is quoted along these lines in the Toronto Star, “It’s upsetting, to be honest with you,” says Hussain, who worries Kale’s editorial will further push this kind of discrimination. “It’s a stereotype that brown people will abort a child who is not a boy.”

I might be mistaken, but I suspect that Kale's real agenda is anti-choice to begin with. He confuses fetuses and 'girls' as well as fetuses and 'women' in his Editorial as this quote shows quite nicely, 'Postponing the transmission of such information is a small price to pay to save thousands of girls in Canada. Compared with the situation in India and China, the problem of female feticide in Canada is small, circumscribed and manageable. If Canada cannot control this repugnant practice, what hope do India and China have of saving millions of women?'

Of course, the lives of neither women nor girls are at stake here. The issue is whether or not pregnant women have a right to know the sex of their off-spring. In Canada they do. It's a good thing. Cultural biases need to be confronted where they occur, there mustn't be technical pseudo-solutions to them that infringe on hard-won individual liberties that women can rightly take for granted today in Canada. If the argument really is about the morality of abortion, Kale should have argued that case and should not have chosen to engage in skirmishing activities to do with Indo-Canadians.

I love Marzipan Xmas Stollen. NO excuses there, they're unhealthy, take you quickly closer to full-blown diabetes, but they're delightful.  Imagine how happy I was when I discovered Xmas Stollen from a German manufacturer (baker would be stretching it, considering the quantities they produce) in a local supermarket. Kuchenmeister, according to its own marketing is 'one of the largest cake exporters in the world'.

Well, I know now how they managed to become that largest cake exporter... fraudulent marketing. Simple as that. I would have expected the 'marzipan' Stollen I bought to have the marzipan centre you can see in the image below (carton). Compare that against the dreary reality of Kuchenmeister's actual product. 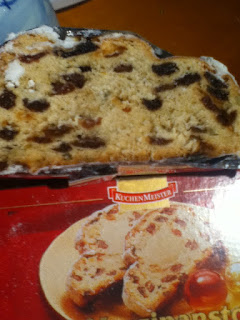