I meant to write this awhile ago, but haven't had a chance to do so. These days I am pretty busy working on various book projects that involve fairly heavy writing as well as editing. I'm hoping, when my sabbatical is over in a year's time, I might have three books to show for the time spent away from university. So, here's the plan. I'm writing with Russell Blackford 50 Great Myths About Atheism. I guess it's fair to say that we are only a few weeks away from completing the manuscript. Then I'm producing with Helga Kuhse and Peter Singer the 3rd edition of the bioethics text book Bioethics: An Anthology. We hope to be done with this project by the end of this year. Last but not least, come August I will start writing in all earnest for a joint project with Christopher Lowry, a book called Global Health Ethics. All of these will be out with Wiley-Blackwell.

Well, other than these projects, I do continue editing both the journals Bioethics as well as Developing World Bioethics, with Ruth Chadwick and Debora Diniz, respectively. There's also a few other articles promised to editors of anthologies and bioethics journals that I am trying to complete. Yep, that's about it. It's gonna be a very busy time. It's interesting that fellow academics' first question, when they hear that you're going on a sabbatical, is 'where are you going?', when really they might as well ask, 'what will you be doing?'. Anyhow, I'm trying to travel as little as is feasible in order to get on with the task of completing these projects.
at May 25, 2012 No comments:

Some weeks ago I wrote here about Dr Spitzer, a noted US psychiatrist who penned many years ago a study ostensibly showing that it is possible to change the sexual orientation of homosexual people who wish to do so. His work has since been used by mostly religious fundamentalists for blaming gay people to be what and who they are, and for suggesting myriad bogus conversion schemes (all condemned by professional psychiatric and psychological associations the world all over etc.).

Dr Spitzer noted in an interview that he thinks he misinterpreted what 'ex-gay' homosexuals he interviewed for the purpose of the study told him. There was a big outcry over this. Spitzer claimed that he tried to retract his study but the Archives of Sexual Behavior where he published his work allegedly refused to do so. The Editor of said journal says that that ain't exactly how it happened, but be that as it may, in today's New York Times Spitzer declares in an interview that he has written a Letter to the Editor of the Archives of Sexual Behavior denouncing his own work and that this letter would be published in said journal. A draft of the letter has been leaked some time ago. It ends with an apology to the gay community for the harm done to the gay community by his study's baseless support of 'reparative therapy' for homosexuality.

A remarkable article in the German news magazine DER SPIEGEL reports an incident in the German state of North Rhine Westfalia. A bunch of radical rightwingers and a bunch of fundamentalist Muslims ran into each other during a demonstration. The rightwingers clearly intended to provoke the Muslims by showing a Danish cartoon depicting the religious figurehead of Islam in a not particularly favorable pose. As you might recall, when a conservative Danish broadsheet published said cartoon there was a big outcry amongst Muslims (they don't like any depictions of their prophet, neither positive nor negative ones). A lot of people were duly killed by enraged Muslims (including, not unexpectedly, many Muslims). So, when in Germany the rightwing activist group Pro-NRW announced its demonstration and its intention to display the Danish cartoon it knew that its favoured enemy, enraged Muslims, would show up and make complete and militant fools of themselves. and so they did. - Between the two of us, without the help of radical Muslims and anti-Islamophobia leftist counter demonstrators, nobody would have taken notice of the 30 or so pro-NRW demonstrators. But hey, like bulls don't take lightly to red sheets of cloth neither do Muslims or leftists in Germany take kindly to a tiny rightwing group trying to look like they actually have the people on the ground to organise a serious demonstration. Fun was had by all involved: The end result, a whole bunch of seriously injured people, including police officers trying to keep the peace between the two sides.

None of this is terribly newsworthy, of course. Rightwingers (especially rightwing Christians) and fundamentalist Muslims love having goes at each other in Western societies, because the rightwing Christians mistakenly believe they own these places and need to defend them against Muslims wanting to establish Sharia law. It's of course a good idea to defend the secular state against any kind of religiously motivated legislation (lest you want to live in failing states like Iran or pseudo-outfits like the Vatican).

Here's the odd bit. The interior minister of the state where said demonstration took place wants to place restrictions on future demonstrations by the extreme rightwing group. A prohibition on showing the offending Danish cartoon during public demonstrations is in the making. Here is the tortured logic: The Islamic fundamentalists count about 1500 members according to the German security services. There is about 4 million Muslims in Germany that want to have little, if anything, to do with their violence. In order to protect German police officers from their violence it is necessary to prevent the extreme rightwingers from showing the cartoon during their demonstrations.

I have no sympathies for the rightwingers here, but it seems to me as if the German state is caving in to Muslim fundamentalists.  German citizens would - in future - be prohibited from doing things that could offend members of a Muslim fundamentalist sect in the country, lest the Muslims would otherwise go on a rampage injuring police officers and other demonstrators. Freedom of speech is subjugated to concerns about security of the security forces (whose job, among many other obligations, ironically, is to uphold German citizens rights to express even harsh criticism of religious ideologies). I can't wait to hear how the German courts will respond to this interior ministerial edict.

Interesting parallel:  in Jamaica, a Caribbean island state known for its large number of militantly anti-gay Christian citizens, we see the police routinely prohibiting demonstration by gay civil rights groups. Their logic also is that there are so many enraged Christians out there that they couldn't guarantee the safety of the demonstrators (at least - unlike in Germany - they're not concerned about the security of the security forces). Another example of a democratic society caving in to religiously motivated militancy.

The trouble with religious freedom is that it is all too frequently misunderstood as the unrestricted freedom of the religious to run roughshot over everyone else.

What is it about Christians and sex? Really... 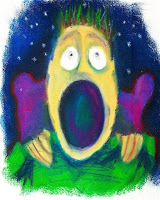 Apologies to everyone for being a bit behind with blog postings these days. Russell Blackford and I are busily working away on our next book. It's going to be a follow-up to our popular 50 Voices of Disbelief - Why We Are Atheists. You can buy it now (other than in English) also in Polish, Korean and Spanish editions, if you feel so inclined. I understand that North Koreans won't be able to get their hands on the book because there is no picture of Kim Il Sung on the cover. My bad, should have thought of that :-). Anyhow, so we're close to completing the manuscript of a book tentatively called  50 Great Myths About Atheism.

It is no secret that I am an atheist, and a gay one to boot, so there's no news in me having little time or patience for Christianity, Islam and whatever other religious this-n-that that has been invented by humans many centuries ago. I would not mind if god people went about their own business, praised their god in their houses of worship or at home and left it at that, but they don't seem to be able to stay out of OTHER people's lives. They just can't. It's not how they roll!

What truly drives me against the wall at the moment is aggressive campaigning by the Roman Catholic Church against marriage equality in the US and also the UK. In the UK, the Roman Catholic Church is now taking its campaign into its schools (taxpayer funded, that goes without saying, the Catholic Church wants maximum ideological influence in state affairs, but it hates paying for the privilege). Faith schools, of course, are a contradiction in terms. It's a bit like suggesting that there could be communist, capitalist, scientologist or any other ideological schools, as if there was more than one empirical reality to be taught. Now, IF that organisation was a beacon of morality and its senior management staff were known to abide by the Church's teachings all the time, I would still disagree with them, but there would be at least some begrudging respect from me for their consistency. The thing is, not a day goes by without further revelations of Cardinals (ie very senior Church management folks running around in usually wonderfully camp dresses - well, if you're into that sort of thing) protecting pedophiles amongst their staff (priests and upward) from state prosecution. They didn't even bother warning parents who mistakenly left their children in Church hands about the impending danger.  Really, I kid you not, they did not!

These same people think nothing of it to tell secular societies today how they should legislate in matters marriage. Old guys who never managed to hold a stable relationship with another human being in their lives - really? Old guys who count large numbers of pedophiles among their ranks lecture us - really? Do you, Roman Catholic Church, really have no shame at all?  On what grounds - really - do you claim competence in matters ethics or actual worldly life?

If you think, by the way, this was just a Catholic phenomenon... here's a Baptist preacher advising his congregation to beat up their kids, crack their wrists even, if they are suspicious the kids might be gay.

If you feel like reading up on Christianity's crimes throughout its history, you might want to take a closer look at learning German and reading Karlheinz Deschner's 10 (!) volume Criminal History of Christianity. It'll be well worth your time, and you likely will be even more reluctant to listen to Catholic clergy going on about morality.
at May 02, 2012 3 comments: