Scholars at Risk (SAR) calls for letters on behalf of

Scholars at Risk (SAR) is gravely concerned about Mr. Ramin Zibaei, a scholar of psychology and dean at the Baha’i Institute of Higher Education in Tehran, who has been arrested and detained for several months.  SAR asks for letters, faxes and emails urging the appropriate authorities intervene by reexamining his case and, pending his earliest release, by ensuring his well-being, including access to family, legal representation of his choosing and medical treatment.

Scholars at Risk is an international network of over 260 universities and colleges in 33 countries dedicated to protecting the human rights of scholars around the world and to raising awareness, understanding of, and respect for the principles of academic freedom and its constituent freedoms of expression, opinion, thought, association and travel. In cases like Mr. Zibaei's involving alleged infringement of these freedoms, SAR investigates
hoping to clarify and resolve matters favorably.

Scholars at Risk has learned that Mr. Ramin Zibaei was one of over a dozen staff and faculty members of the Baha’i Institute of Higher Education (BIHE) arrested in late May. He has been held since. Mr. Zibaei completed a Master’s level program in psychology at BIHE and has taught extensively at the institute over the past 8 years, holding positions as member of the psychology department and dean of social science faculty. Scholars at Risk
understands that since his arrest Mr. Zibaei has not been permitted to receive regular visits from his family and has not been granted access to legal counsel, in apparent disregard of international standards of due process, fair trial and detention as guaranteed in the Universal Declaration of Human Rights and the International Covenant on Civil and Political Rights, to which Iran is signatory.

The suddenness of Mr. Zibaei’s arrest and the lack of any clear basis for his detention raise grave concerns about the ability of intellectuals and scholars to safely work in Iran. Taking into account reported arrests of several additional Baha’i scholars in May—and the reported arrests of scholars following the June 2009 election—Mr. Zibaei’s detention suggest a wider attempt to exclude Baha’i individuals from the higher education
community within Iran and more broadly to intimidate intellectuals and to limit academic freedom in Iran.  Scholars at Risk finds this suggestion particularly distressing and unfortunate, given Iran’s rich intellectual history and traditional support for the values of scholarship and free inquiry.

Scholars at Risk therefore joins with many national and international academic associations, human rights organizations and individual scholars in respectfully urging authorities to ensure that Iran’s obligations under international law are upheld with regard to Mr. Zibaei, his colleagues at the Baha’i Institute of Higher Education (BIHE) and other intellectuals in Iran. Scholars at Risk respectfully implores authorities to reexamine Mr.
Zibaei's case and, pending his earliest release, to guarantee his well-being and to ensure that he is granted access to family, legal representation of his choosing, and medical treatment.

Scholars at Risk invites letters, emails and faxes be sent:

-respectfully urging authorities to ensure that Iran’s obligations under international law are upheld with regard to Mr. Zibaei, his colleagues at the Baha’i Institute of Higher Education (BIHE) and other intellectuals in Iran; and

-respectfully urging authorities to reexamine Mr. Zibaei's case and, pending his earliest release, to guarantee his well-being and to ensure that he is granted access to family, legal representation of his choosing, and medical treatment.

The Honorable _________
Ambassador of the Islamic Republic of Iran to [YOUR COUNTRY]
[POSTAL ADDRESS]
[FAX]
[EMAIL]
(See http://www.mfa.gov.ir/cms/cms/Tehran/en/Missions/ for a list of Iranian embassies worldwide.)

To view a model letter of appeal, as well as a copy of SAR's letter, please visit:
http://scholarsatrisk.nyu.edu/Education-Advocacy/Alerts-Scholars-in-Prison.php.

This Action Alert was posted by the AAAS Scientific Responsibility, Human Rights and Law Program on behalf of Scholars at Risk. SRHRL has not
independently verified its contents.
at August 30, 2011 No comments:

How not to argue against assisted dying 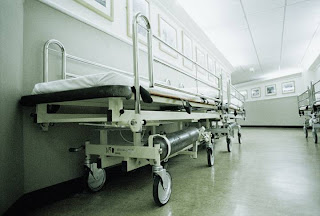 Frequently in debates about assisted dying opponents of decriminalization argue that if a society went down that road it would also find itself on a slippery slope. The slippery slope would entail that if we decriminalized we would quickly slide down this slope and end up in a situation where people get killed against their wishes. These arguments take various forms and shapes. I want to use this entry to show how not to deploy this type of argument, no more no less. This entry is not a plea for decriminalization, it merely offers a critique of typical examples of failed slippery slope arguments.

I found the commentary in today's issue of the Telegraph newspaper. Let me give you a bit of background first. A 43 year old man suffered a devastating stroke some time ago that left him paralyzed to the point that all that he is able to do on his own is to move his eyes. He made it clear that he would like assistance in dying, because he himself does not consider his life worth living. For those of you who care about philosophy, you'd cash that out in terms of autonomous decision-making in a liberal democracy and all that, but as I said, I will not be making the case in favour of decriminalization today.

Telegraph writer Alasdair Palmer is one of those columnists that broadsheets tend to employ to encourage their readers to cancel their subscriptions. Writing for a conservative newspaper with a strong religious bent you'd expect him to take a stance against decriminalizing assisted dying. That, of course, is fair game, reasonable people can disagree on such a contentious issue, but you'd want to see each side at least to argue their case genuinely and not to engage in skirmishing activities. Here's how he builds his case, and here is also how you'd not do that if you agree with his conclusion, because he fails to make his case. Mr Palmer's offering consists of slippery slope dangers.

His argument goes like this (read it here, lest I be criticised for supposedly misrepresenting Mr Palmer's arguments): Mr Palmer sympathizes with the patient in question. Mr Palmer also concedes that he finds it difficult to argue that the patient should be condemned to continue living. The patient started a lawsuit petitioning that legislation is changed that reportedly permits his family members to kill him out of compassion without getting prosecuted for murder (recall that he can't move, so someone else would have to oblige him), but that doctors doing the same would still face the full force of the law and would be prosecuted for murder.

The patient and his family would prefer a health care professional to render the requested assistance, hence the lawsuit. Mr Palmer misrepresents this in a typical slippery slope offering, arguing,

The law starts by allowing family members to help others die. The next step is to rule that you don’t have to be a family member – anyone can get involved.

Of course, nothing could be further from the truth. It is not 'anyone' but members of one of the most heavily regulated professions, namely medical doctors. After telling us again how much he empathizes with the patient, Mr Palmer offers further slippery slopes:

If the law were to incorporate the presumption that those who help the very severely disabled to die should not be prosecuted, it would be very close to assuming that those who do away with the very severely disabled must be doing them a favour. That would not only be wrong, it would also, almost certainly, increase the number of cases of “mercy killing” that are actually straightforward murders.

Mr Palmer's slippery slope offering then is this: If you help competent disabled person A to die (for good reasons, and on their explicit request), society would very likely (ie 'almost certainly') experience an increase in the number of murders of disabled people that do not wish to die. - What is remarkable is that a supposed quality paper such as the Telegraph would publish such agitprop without blushing, but then, newspapers can't blush as we know. For starters, in the case under consideration we have a competent patient requesting assistance in dying. How would that translate 'almost certainly' into the killing of disabled people who do not wish to die? It obviously doesn't translate into this. Mr Palmer could then point to societies where assisted dying has been decriminalized (to be fair to him, he didn't wheel this 'evidence' out on this occasion, but it's usually deployed in the context of this argument), and where indeed cases of involuntary killing have occurred. The problem with this line of reasoning is that there is no evidence that this is a result of decriminalization. In fact, such abuse cases also happen in societies where assisted dying is illegal. Nobody from Mr Palmer's camp has as yet claimed that keeping assisted dying illegal is the cause for such abuse cases, while they have happily claimed this slippery slope for societies where decriminalization has occurred. No surprise then that Mr Palmer concludes,

...it is impossible to change the law in the way he’d like without producing a system that makes it easier to kill people who want to live.

Of course, the evidence he has provided in his article doesn't actually support that conclusion. Mr Palmer isn't finished with just deploying one bad argument. He makes a complete fool of himself in the remaining two paragraphs of his commentary. He goes on to suggest a further slippery slope, saying that if Britain extended the right to assist someone in dying out of compassion from family members to others, the country would run a 'terrible risk' of being overrun by Kevorkian type characters. You have seen already how slippery slopes fail. This one is another spectacular failure, even more obvious than the first slippery slope Mr Palmer served up in his short commentary. Kevorkian's actions could be paraded as a good example of the unregulated chaos that could ensue in societies that have not decriminalized. He killed patients in the USA when assisted dying there was outlawed. That's why he went to jail in the first place. So, the only slippery slope that one could conjure up in the Kevorkian context is that criminalizing assisted dying leads to Kevorkians (note that I am not making this case, what I am saying is that based on Mr Palmer's screwy logic this would follow).  - My own view would be, by the way, that if a society decriminalizes they should limit the right to assist to health care professionals as opposed to family members. At least health care professionals are governed by professional codes of conduct, whereby family members... oh well.

Palmer ends his diatribe with a misrepresentation of the patient's legal case, too, by claiming that

...it is impossible to disagree with Martin when he says that he would prefer to be dead. But that does not mean that anyone else should be obliged to kill him.

Of course, the truth of the matter is that nobody is suggesting that doctors should be legally obliged to assist, but rather that they'd be able to assist if they wish to volunteer. I wonder whether we will see the Telegraph publishing a correction at some point further down the track.

And here ends the rant against slippery slopes in discussions on end-of-life decision-making.
at August 21, 2011 2 comments: 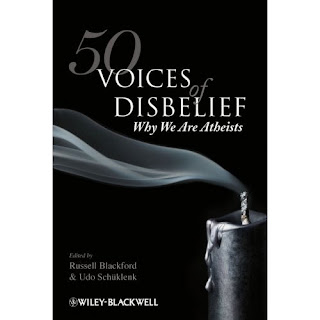 More good news about our anthology! It's soon available in Polish as well as Korean language editions. Today I learned that a Spanish translation is also in the making!
at August 03, 2011 No comments:

Email ThisBlogThis!Share to TwitterShare to FacebookShare to Pinterest
Labels: 50 voices of disbelief, translation 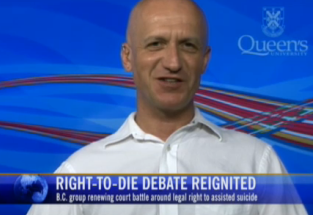 Here's a link to a brief CTV interview I did on assisted dying in Canada and two recent cases reaching the courts in British Columbia.
at August 02, 2011 No comments: