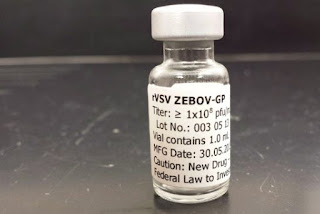 The mass media excitement about Ebola has receded. The 2014-2015 West African outbreak has been brought under control not thanks to the deployment of successful treatment regimes, because there are none that are known to work. I participated recently in an international meeting of experts debating the ethical and methodological issues pertaining to trial designs for emerging infectious diseases like Ebola. It was both astounding and also immensely frustrating that to a large extent the controversies that exercised the minds of the delegates of this meeting exercised the minds of many an AIDS activist and clinical trials’ expert prior to the advent of highly active antiretroviral therapy, a good quarter of a century ago.[1] [2]Are placebo controls an ethically defensible methodological tool when patients face a terminal illness? Different alternative trial designs involving placebo controls, adaptive trial designs, and multi-stage approaches involving active controls were discussed during the meeting. The heated nature of some of these debates reminded me strongly of the passion that was on display during the early HIV trials. It turns out, despite decades of informed debate about these issues, a number of significant normative questions have not been settled.


A cluster of difficult ethical questions that engendered justifiably a lot of debate has to do with the use of placebo controls in trials involving patients facing a very high mortality risk (some in excess of 90%) and a fast-acting infection resulting in the death of these patient within 2-8 days after admission to a treatment centre. This scenario mirrors the sobering reality faced by a subset of Ebola Virus Disease patients. This issue was already highly contentious during the early HIV trials, and then patients and clinical investigators were faced with a virus that was nowhere near as fast-acting as the Ebola virus. The ethical conflict that arises here is this: We know that those randomized into the placebo arm face the same greater-than-90%-risk of death within a few days as those who receive the standard of care treatment. In some trial design the placebo control arm could be identical to the gold standard of (unsuccessful) clinical care provided in a particular clinical setting. Given that those who are randomized into the arm featuring the unregistered medical intervention might do better, or might do worse, or might do roughly as badly as those in the placebo control arm, the ethical question remains whether a trial design featuring a placebo control is ethically justifiable, given the almost certainty of imminent death faced by those randomized into the placebo arm. During the meeting I alluded to earlier a fairly contentious debate arose also over the question of whether trials producing less reliable results than placebo controlled trials might be acceptable under such circumstances.


What exacerbates the ethical challenges for those who undertake such trials is that their trial participants are arguably not true volunteers. Their – dying - trial participants are not given the opportunity to choose between participating in the placebo controlled randomized trial versus accessing the unregistered medical intervention on their own volition outside the trial process. It is perfectly conceivable that some patients might choose to participate in such trials in order to facilitate the development of a successful intervention capable of helping future patients like them. Or they might accept that there exists true clinical equipoise between the trial arms and they might be volunteering to be randomized under such circumstances. In the absence of alternative access routes to the unregistered medical intervention, we can never be certain that the patients agreeing to be randomized are not simply responding to what constitutes a coercive offer.


Clinical investigators colluding in this process, and arguably benefiting from it, are not absolved of their ethical responsibilities because they did not create the regulatory frameworks that gave rise to the problem. It is true that they did not create the regulatory framework under which they operate, but they undoubtedly benefit from its existence. We could respond to this kind of argument by pointing to the societal need for sound trial designs and the detrimental impact of permitting patients to access unregistered medical interventions outside the clinical trials’ system. The likely impact of permitting patients access, as a senior biostatistician attending the workshop rightly pointed out to me, would be a significant slowing-down in the trial recruitment process. Some trials might never be able to recruit sufficient patients, because most patients might be voting with their feet and opt to take their chances with the unregistered medical intervention. Surely that is not quite what is in the best interest of any society battling an emerging infectious disease such as Ebola. Does this justify coercing dying people into particular trial designs? I do not think so, but this is a contentious issue where reasonable, well-informed people can justifiably differ. A WHO panel looking at this question argued that while it would be ethically defensible to offer emergency access to unregistered medical interventions to Ebola patients, this should be subject to that emergency access not slowing down trial recruitment.[3] The panelists (not featuring a single expert or disease survivor from the affected countries) took a policy line here that mirrors US regulations. Other countries, including Canada and South Africa do not make this a threshold condition for emergency access. As it is with these sorts of panels, the advice it rendered on this controversial topic is not actually reasoned for, so policy makers and regulators as well as patient rights advocates aiming to balance the competing interests of access versus trial recruitment in a fair manner will be left wondering about the ethical reasons for this policy stance taken by the WHO panel, assuming there are any.


There are other ethical issues that arise in this context: Some experimental agents existed at the time only in insufficient quantities, for instance ZMapp, an unregistered medical intervention composed of monoclonal antibodies, was only available in very limited quantities. In light of this situation, is it acceptable to prioritize patients in comparable clinical circumstances who are willing to be randomized in a placebo controlled trial over patients clamoring for direct emergency access, given that the available quantities of this unregistered medical intervention would have been used up in the placebo controlled trial?


And here is another difficult question: While the AIDS activists of days gone by were highly educated about their disease and about the available unregistered medical interventions considered for expanded access programs, this is not quite the case with regard to the average West African Ebola patient. These patients were unlikely able to provide valid first person informed consent, because they were unable to demonstrate a reasonable person understanding of what was known about the unregistered medical intervention, about their options and so on and so forth. This is the case both because of educational limitations as well as disease progression. Are short-cuts to informed consent ethically justifiable under such circumstances? Given that time is of the essence and proxy consent might not be feasible due to family members being deceased or in a far-away village, are our informed consent requirements reasonable under such emergency circumstances?


The WHO panel suggests that evidence from nun-human primate experiments might be sufficient to justify offering a particular unregistered medical intervention for emergency access. Is that an ethically justifiable stance, given the high mortality rate and fast-acting nature of the infection?


Let me leave you with a final difficult question to ponder: Imagine you were running a medical NGO providing access to unregistered medical interventions to patients you care for in your emergency medical centre. By some fluke your unregistered medical intervention permits some of your patients to survive, but that survival comes at a high price, debilitating after-effects of the Ebola virus as well as of the unregistered medical intervention. Given concerns about your patients’ capacity to provide valid informed consent, should you accept responsibility for the patients’ future care and upkeep, given the lack of state infrastructure to assist these patients? If you accept responsibility for their care, say, by taking out an insurance package from some provider for them, you will expend a fair amount of donor monies on these patients (potentially for decades) that you cannot use to assist patients also facing life-threatening illnesses in other parts of the world. In other words, you face another ethical challenge, a resource allocation challenge. How should that medical NGO go about addressing this challenge?

This is brilliant. Former PM Stephen Harper appointed in the dying weeks of his government a smallish panel of anti-choice activists to advise his government on how to implement the Supreme Court of Canada's ruling on assisted dying. The CBC reports today that PM Trudeau's government has moved to curtail this panel's scope of activities. It doesn't want advice from the panel on possible legislation any longer, the federal government simply asks the panel members to summarise the results of its consultation. I'm pretty sure the results of this panel's activities will be filed away right after that. Game over for these anti-choice activists. Here is some more background information on two of them. Note that both of them were expert witnesses on behalf of the Harper government fighting the case against assisted dying in our courts. Their expertise sank without a trace when the Supreme Court decided unanimously that depriving us of access to assisted dying violates our Charter rights. Mind boggling the amount of tax monies that were wasted on their activities.
at November 16, 2015 2 comments:

Finally out - my new bioethics textbook 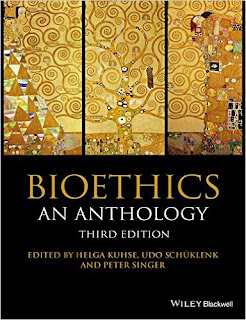 After a year's worth of intensive sourcing of new content and a year's worth of intensive deliberations with Helga Kuhse and Peter Singer, the new edition of Bioethics - An Anthology is finally out. In case you care about bioethics, check it out. Amazon currently has the Kindle version on sale, but I understand that the print copy is arriving in warehouses as I write this.
at November 16, 2015 No comments: