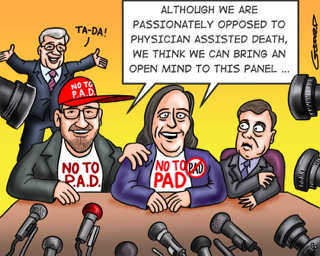 On Friday July 17, the Federal Government made a long-awaited announcement regarding the implementation of physician-assisted dying. As Justice Minister Peter Mackay had promised, the government has convened an external panel to consult with Canadians and make recommendations to government.

The three-member panel includes two individuals who were expert witnesses for the Crown in the Carter Case regarding the right to die with dignity.

Dr. Harvey Chochinov and Dr. Catherine Frazee both argued against the right of Canadians to have access to physician assisted dying.

Dr. Chochinov, the panel chair, is a well-known palliative care physician who claims that assisted death is unnecessary and Canada should instead simply focus on improving palliative care. He wrote about his views in this recent editorial for the National Post.

Dr. Catherine Frazee served as Co-Director of the RBC Ryerson Institute for Disability Studies Research & Education. In an opinion piece for the Halifax Chronicle Herald, Dr. Frazee argued that legalizing assisted dying would put pressure on individuals with disabilities and might result in their being coerced into choosing an assisted death.

The third and final member of the panel, Mr. Benoît Pelletier, is a University of Ottawa law professor, a constitutional expert, and a former cabinet minister in Jean Charest’s provincial cabinet.

Although an Ipsos Reid poll conducted last October found that 84% of Canadians, including the majority of supporters of all political parties, believe physician assisted dying should be legal, that means nothing to PM Harper. Once again we see him subverting democracy. Now he shows he’s even willing to play politics in matters of life and death.
at July 31, 2015 No comments:

Canada's Supreme Court found unanimously that the criminalisation of assisted dying violates our Charter rights. Mr Harper's government was hell-bent on persuading the Court that assisted dying would pose a serious threat to vulnerable people, and whatnot else. The Crown's expert witnesses were sufficiently weak in the evidence that they presented that not a single judge on the Supreme Court (the majority of whom were appointed by Mr Harper) sided with the government.

Mr Harper, ever so keen on pleasing his party's religious fundamentalist voter base, has now appointed a panel of three to manage a consultative process with Canadians and to recommend to the federal government how it should regulate assisted dying. Mr Harper's government has a long-standing tradition of ignoring Supreme Court judgments or of trying to subvert them. I'm afraid, the same will happen with the Court's assisted dying ruling. Mr Harper will fail on this occasion, too.

Two of the three folks on the panel are anti-euthanasia activists. They duly told us that their personal views would not affect their recommendations. That is pretty funny.

For at least one of them, the panel's current Chair, Dr Harvey Chochinov, we know that this reassurance is worth little. I have written about his activities in the past.

Dr Chochinov was (as his fellow panelist and fellow anti-choice activist Catherine Frazee) an expert witness the Crown attorneys wheeled in to bolster their anti-choice case in the Supreme Court. His analysis and expertise sank pretty much without a trace. To give you an indication to what extent Dr Chochinov's personal views on the subject influence even his expert opinion in a Canadian court, consider the following:


A little-known Canadian on-line journal called Current Oncology published – curiously timed for the BC Supreme Court proceedings - a piece by Jose Pereira an Ottawa based anti-euthanasia campaigner. The on-line journal ran the article at the time as a regular article, implying that it underwent anonymous peer review. It eventually relegated it to an opinion piece status after it became clear how error-ridden it actually was.  Jocelyn Downie and colleagues undertook a line-by-line analysis of said article, since also published in said on-line outfit. It turned out to be the case that many of Pereira’s claims were not only not backed by the references he chose to insert, but that literature he cited actually reached conclusions different to those he reported. Dr Chochinov, chair of Mr Harper's anti-choice panel, didn’t hesitate to call the discredited piece by Pereira an ‘excellent article’ in his expert report. (Carter v. Canada (Attorney General), 2012 BCSC 886 (Expert Report, Dr. Harvey Chochinov at pp 16-17).

You tell me, is that an indication of a professional capable of rising above the fray and not letting his personal views influence his professional work? I think not.

So, when his fellow anti-euthanasia activist, Dr Frazee, assures a skeptical public that she and her fellow panelists would not let their personal views on assisted dying interfere with the panel's work, pardon me for not believing a word of what she is saying. Her panel chairman has gone so far as to praise in Court, as an expert witness for the Crown, a piece of research that served his ideological convictions, even though it was patently obvious that said piece of research was nothing much other than an agitprop exercise by a fellow anti-choice activist.

The good news for us Canadians is that it won't matter what this panel reports. By the time it reports, the government that appointed it won't be anymore. Even if, courtesy of NDP/Lib vote splitting, it sneaks back in, the Supreme Court will eventually ensure that our constitutional rights are protected, no matter what Dr Chochinov and colleagues report back to government.

It is troublesome that Dr Chochinov and his fellow-panelists saw it fit to accept Mr Harper's invitation, given the obvious election campaign related nature of their appointment. But then, Dr Chochinov has a less than stellar record when it comes to ethical judgment. So, perhaps he is the right man for Mr Harper's job after all...
at July 18, 2015 No comments: