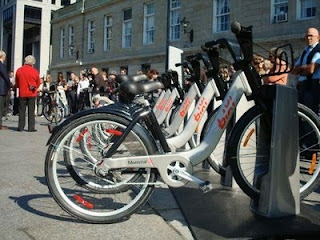 Montreal has this widely hailed scheme where you can rent bikes to travel about town. I think London is considering using the same scheme. The bikes are called Bixi, and they're kind of public bikes. The idea is great. There's plenty (I will get back to that one) locations (bike-racks) all over Montreal where you slot in your credit card and you can use the bikes. The idea is that you use them for short trips, quasi from bike-rack to bike-rack. You pay for the time that you use them. That's all dandy, until you realize that there's no bike-racks in lots of places. So, while working in Montreal last week I duly used the Bixi. Well, after a 15 minute ride I ended up where I had to go (by no means an off-the-beaten track location) and, surprise surprise, there were no bike-racks anywhere close by. In other words, I had no bike-rack to return my Bixi to, and had to keep on paying until my work meeting was over and I was able to return to where I picked it up. The result was a bill of 39.50 $. For that I could have rented a car for a full day or probably used a comfy limousine service forth and back. It's been a complete and utter waste of time and money! I suspect the rip-off scheme is hugely profitable for the city of Montreal.
So, here's my advice to Montreal, THINK prior to instituting such schemes. I for one won't touch your green bike scheme ever again. Let the buyer beware!
at May 24, 2010