Apologies for the brief hiatus 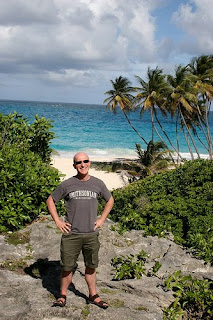 Folks,
I have been away for a week on Barbados. Sand, palmtrees, lukewarm water and rum ain't exactly my cup of tea, so I's worried about being bored out of my mind. Thankfully I got plenty of lifts around the porous island, but still, a week was more than enough. My suspicion about life on such places was kind of confirmed. All pretty to look at, but the reality is nonetheless dead boring. I've had a great time though and took my fair share of photos. Good enough for a week-long trip, but imagine you had to live there. Invariably there's an overwhelming number of God people, so there were training sessions preparing people for the Rapture on offer. How cool is that? In case you didn't know, it's coming on October 21, 2011. Oi wei. I uploaded my photos on a low-to medium-level size only, so they're not print quality. Feel free to browse. - We flew on JetBlue, and it's been a great experience. Highly recommended, just don't expect any service from their ground staff in Barbados. They're badly trained and pretty much useless. Other than that, beats air Canada at any time, both in terms of in-flight experience and in terms of price (by a long long stretch).
Well, coming back home I face more US brabrabra. Obama's Supreme Court nominee is rumored to be a lesbian woman. Bill O'Reilly, funny man at Fox News, decided that we've a right to know as she might have to vote on gay marriage. I kinda wonder why the same logic shouldn't apply to heterosexual, bisexual and other-sexual members of the court?
at May 16, 2010