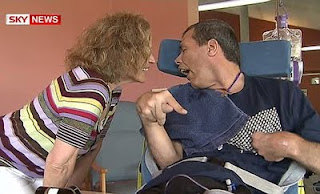 You might recall the case of the Belgian patient who after 23 years in a locked-in kind of state, and who had been reportedly misdiagnosed as being in persistent vegetative state (PVS), suddenly began 'communicating'. In case you don't remember, here's my report (and take) on the case. The odds are that the patient in question has indeed been misdiagnosed for years as being in PVS. The thing is also, unfortunately, that the case was quickly hijacked by Christian campaigners to further their own ideological agenda. Understandably, every misdiagnosed patient is a cause of concern in the context of ongoing arguments about the question of whether or not it is acceptable to dehydrate PVS patients and let them die. A true PVS patient would not suffer due to his/her brain condition. A patient in a locked-in state would note that this is happening and might well suffer. The Christian campaigners are presumably aware of the fact that public opinion ain't on their side with regard to true PVS patients. One reason for this is that a PVS patient can't truly benefit in any meaningful way from his/her continued existence.

My own view on the issue is that the lack of benefit to the patient in its own right would not be a good reason to discontinue his/her existence, especially if - as is the case in PVS patients - there is no pain or suffering involved in their continued existence. While there are people about who care about such patients' ongoing existence and who would find the patients' discontinuation distressing, we have a good reason to keep them alive. The only counter argument I can see on this front is that resource allocation concerns might tilt the scales toward discontinuation.

In any case, back to the Belgian man. Imagine the excitement of our Christian campaigners when the Belgian doctor of the patient demonstrated that the locked-in man was even able to 'talk' to us. He 'talked' to us by means of a helper who assisted him typing his words (aka answers to the questions asked by the attending physicians) onto a touchscreen computer. I was skeptical in my original blog entry that this widely discredited method of communication was to be trusted this time around. I mean, how likely is it that a guy who hadn't moved for more than two decades would suddenly engage in (albeit assisted) small-talk. Well, it turns out that I was right. An investigation of the matter by the German weekly newsmagazine DER SPIEGEL confirmed that it wasn't the patient who said anything but his assistant (thanks to Art Caplan for bringing this to my attention!). So, now we know what his assistant thought the patient would have answered if he hadn't actually been unable to answer. Here's what the magazine reports:

'The staff at Houben's care center first tried an on-screen keyboard that he could operate using his right index finger, which is not fully paralyzed. For a while, it seemed like a good idea and, after some practice, Houben was able to type rather quickly. He made many mistakes, but his messages were understandable. Still, using that method required the assistance of a speech therapist, who stood behind him to support his hand. At one point, Laureys, the neurologist, claimed that he had ruled out the possibility that it was actually the speech therapist doing the writing. But it turns out that his checks weren't quite thorough enough. Obtaining reliable results requires a rather protracted procedure. Patients with serious traumatic brain injuries are not always capable of following difficult instructions. They also sleep a great deal, and sometimes they sink into extended periods of delirium. In order to rule out false negative results, repeated tests need to be conducted over the course of several weeks.

Laureys has now carried out those tests, and his results hold that it wasn't Houben doing the writing after all. The tests determined that he doesn't have enough strength and muscle control in his right arm to operate the keyboard. In her effort to help the patient express himself, it would seem that the speech therapist had unwittingly assumed control. This kind of self-deception happens all the time when this method -- known as "facilitated communication" -- is used. (As a result, the things that Houben was attributed as saying to SPIEGEL for an article printed in November 2009 were also not authentic.) In the more recent test, Houben was shown or told a series of 15 objects and words, without a speech therapist being present. Afterward, he was supposed to type the correct word -- but he didn't succeed a single time.

This doesn't necessarily discredit facilitated communication altogether. Laureys analyzed another paralyzed test subject who answered all 15 control questions correctly despite having a comparable brain-damage diagnosis. "That means it is really necessary to verify every single case," Laureys says. Now the work with Houben will have to start all over again. But there is one thing for sure -- images taken of his brain activity reveal that it is behaving only slightly differently from that of a healthy brain. As a result, researchers are fairly certain that Houben is conscious -- and they find themselves in the desperate position of a rescue team trying to dig out a person from under the rubble.'

It is troublesome that no major news organisation has picked up on this revelation, so their flawed initial reporting about the ongoing communications from this patient remains uncorrected.