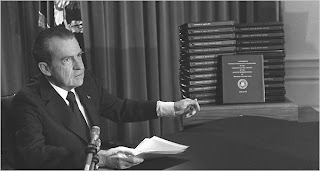 The US Supreme Court struck down laws criminalizing abortion in its landmark Roe v Wade decision. Richard Nixon was Pres of the US of A at the time. The New York Times today quotes from another batch of his never-ending tapes. They were released yesterday by the country's National Archives.

'Nixon worried that greater access to abortions would foster “permissiveness,” and said that “it breaks the family.” But he also saw a need for abortion in some cases — like interracial pregnancies, he said.

“There are times when an abortion is necessary. I know that. When you have a black and a white,” he told an aide, before adding, “Or a rape.” '

No wonder the Republican Party is so widely reviled. They haven't had a great deal of success in terms of picking sensible leaders, hu?
at June 23, 2009