Gambia's crackpot leader is at it again 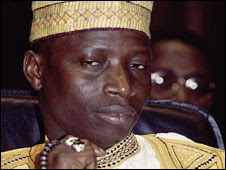 I have written before about the amazing leadership qualities of Gambian President Yahya Jammeh. Last time I wrote about this African leader I noted that his claim to have personally found a cure for AIDS might have been ever so slightly mistaken - well, I used more drastic words. Since then a reader of this blog alerted me to information about the latest travails of Gambia's leader. Yahya Jammeh had about 1000 villagers abducted by his special forces and rounded up in camps where 'witch doctors' beat the living hell out of them and forced them to drink all sorts of noxious substances. Reason being: the cause of death of the great leader's aunt was alleged witchcraft. So the Pres imported 'witch hunters' from neighbouring Guinea and had them have a go at about 1000 randomly chosen Gambian villagers. Amnesty International reports 'Many said they were then forced to confess to being witches. In some cases, they were also allegedly severely beaten, almost to the point of death. ... Villagers said they had been held for up to five days and forced to drink unknown substances, which they said caused them to hallucinate and behave erratically' I thought the Roman Catholic Church had a monopoly on these sorts of activities, but no, Muslim leader Jammeh seems to be operating in the same vein. Never mind that this kinda stuff is happening today, a few hundred years after the Catholics fought 'witchcraft' and burned to death a lot of people all over Europe.

Meanwhile, the leader of said Church, Pope Benedict (of ex-Hitler Youth fame) went out of his way to contribute to the AIDS crisis on the African continent by telling the locals in Cameroon that condoms contribute to the AIDS pandemic and that people should not be using them. I'm sure Benedict (whose penchant for wearing red shoes and colorful dresses is well-known and well-documented) is not using condoms either.

It's amazing what kind of things religious folks get up to when given half a chance, it seems. I wonder how long it will take until reality based policies will take hold in such godforsaken (pun intended) places. In any case, the African continent seems to be today's preferred playground for crackpots of all shades and colors. I wonder why...
at March 22, 2009