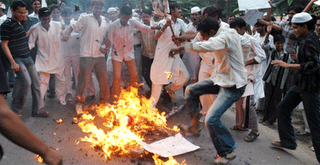 So, there we go again, someone criticises Islam and a few hours later the speaker's effigy is burned all over the Islamic world. There's something slightly contradictory about this peace loving ideology and too many of its proponents and 'representatives'. Particularly ironic is that the Pope (a rightwing ideologue by most people's standards) agrees with those currently burning his effigy on just about everything from opposition to reproductive health rights to gay equality to funny ideas about evolution. Putting these natural allies noses out of joint is kinda intriguing.
Here's what he had to say (quoting an obscure Christian character who died hundreds of years back): 'Show me just what Muhammad brought that was new and there you will find things only evil and inhuman, such as his command to spread by the sword the faith he preached.' Invariably accusations form those burning the effigy suggest that the Pope got it all wrong, yet their very reaction makes one wonder (one being someone like me who is not a scholar on anything Muhammad or Jesus or Dianetics).
What irritates me so very much about this affair is that these people don't seem to realise that their convictions are all man-made. They are chosen by their adherents in a manner similar to other ideologies. It is entirely unclear why their leaders think that somehow they should be above criticism and ridicule anymore then, say, the Labour Party in the UK or the Rpublicans in the US. My gut feeling is that they know about the inellectual poverty of their enterprise. It is probably in direct response to their inability to defend their ideology that they quickly resort to the silencing of critics by various civilised and uncivilised means.
at September 16, 2006