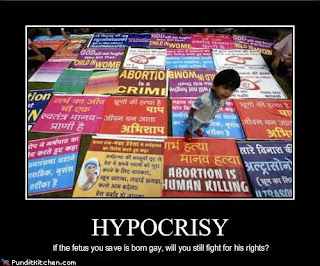 Hypocrisy is a funny thing, I think. During the last few weeks a couple of events made me wonder why we are so often so deeply dishonest and hypocritical. For instance, the Polish President Lech Kaczynski died in a plane crash. That guy was well and truly widely reviled in much of Europe, being the ardent nationalist that he was. He was opposed to the European federalist project, he was opposed to friendly relations with neighboring Germany, his claims to notoriety included prohibiting a gay rights march while he's mayor of Warsaw, and of course attacking the reproductive rights of women. The usual stuff of neanderthal nationalist Catholic Polish politics. He wasn't even greatly loved by very many Polish people. Yet suddenly, when his plane crashed, listening to the eulogies of European and other political leaders you'd have thought a great guy had died, while really a small-minded conservative nationalist departed for his Catholic heaven.
In South Africa, in order to maintain good race relations, Black political leaders had to pretend that they regretted that the militant Afrikkkaaner leader Eugene Terreblanche was clubbed to death by some of his staff. Seriously, this guy spent a life-time working toward preventing the South African majority population from participation in a multi-ethnic democracy. Terreblanche was an unreconstructed vile racist. Is it unfortunate that he was murdered? Of course it was. Is it a great loss that he's gone? Not really. Good riddance is probably the most appropriate response that one should muster in response to the murder. When you think about the larger number of black people that get killed in South Africa, and that are never mentioned in the mass media, why this pretense that it somehow matters more that a miscreant such as Terreblanche was killed? Unlike in the murders of most black people, the local police even quickly apprehended the people who killed him.
Well, and that standard bearer of hypocrisy is at it again, too. This story is most amusing, I got to say. The Pope invited himself to a visit to Britain (paid for by UK taxpayers). Some cheeky UK foreign department staff suggested in a written document that 'the Pope should open an abortion clinic, bless a homosexual marriage and launch his own range of condoms while he is here.' Truth be told, if the Pope and his minions were not so pre-occupied with covering their own tracks in thousands and thousands of child abuse cases the world all over, they might have realized that it seems a tad bit hypocritical to demand that the culprits in the UK Foreign Office be penalized harshly for their practical joke, when the Pope at the same time has pro-actively colluded with senior church management over decades in protecting pedophiles in his organisation's ranks from any kind of punishment. What was it again, sitting in glasshouses and throwing stones??? The church truly never ceases to amaze me. Dr Ratzinger is reportedly considering canceling his trip. For some reason this is of concern to government ministers in the country as opposed to reason for celebration. A Catholic bishop said in an interview that these comments were a sign that Catholic teachings were not taken seriously. He missed probably that actually the junior officials in the UK foreign affairs department are aware of Catholic teachings, they do take them seriously, and they clearly reject them. They're right to do so. - I hope, if Dr Ratzinger decides to go ahead, someone will execute a citizen's arrest, seeing the great man's involvement in the church's pedophile sex scandals.
at April 25, 2010