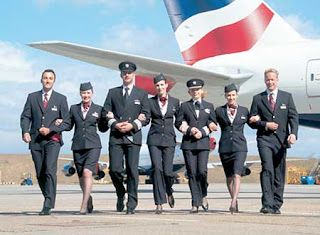 UNITE, the union of the BA cabin staff have called a strike, lasting from December 22 to January 02. Hey, let me declare a conflict of interest. I am scheduled to fly on BA on December 23 from LHR to JFK. I was looking forward to catching up with secular friends in New York to get over the painful sickening sweetness that comes with Xmas. I was also looking forward to giving a talk on December 30 at the APA Eastern meeting in New York, and to a lively discussion about my paper (the joys of the academy).

Well, I may or may not get to New York, who knows. I can't rebook my flight, because it's a return leg, so in a sense I am on the road and can't easily change horses in the middle of the race (or so my booking agent, AA, told me - I had some hope they'd help me, being gold member [pun intended] and all). So, I am likely to be well and truly stuck in London unless BA and UNITE reach an agreement, or unless the UK Supreme Court forces UNITE to back down for the time being. I shall see.

What irks me about the public debate on this is the nasty response by the wider traveling (even the not traveling) public. There we hear stories about priests not being able to return to Africa (to do what, propagate the death penalty for gays in Uganda as they're wont to do? surely they're not doing anything really useful there anyway!), married couples not being able to go on a honeymoon in Florida (at least you won't be eaten by the crocs that are everywhere in that state), and so on and so forth. Some of the stories are truly sad, BUT, surely the point of a strike is to put pressure on your employer. What's the point of striking if nobody notices (us academics faces this problem just about all the time, especially in the context of strikes :-)? So, here's my first point: you can't blame cabin staff for striking at peak season, because this is the best time of the year to go on strike, from a strategic perspective.

BA and the sorry British public opinion on this matter also go on about their cabin staff being paid better than anywhere else in the industry. The company churns out press releases using their (arguably overpaid) inflight directors' long-haul salaries to show how well paid their cabin staff are. Of course, starting salaries for current flight attendants they're proposing now are a fraction of those directors' salaries! They're barely a living wage. Bizarrely the published opinion on the matter points out that Virgin Atlantic cabin staff already are being paid these miserable salaries for the hard work they're doing. What kind of argument is that? Since when has the lowest salary in the industry established what is reasonable? I kid you not, this is the level of public debate in this country!

Then there is people going on how miserable BA's service is. Well, for better or worse, I like the company's economy and premium economy better than that of many other carriers. Compared to Air Canada, for instance, BA's performance is way better. Admittedly, BA's long-haul business class is a bit of a joke (the in-flight service, not the seats). I would not ever fork out my own hard-earned cash for a seat in the far front of their planes, sorry to say.

Either way, good success to their cabin staff, don't let published public opinion in papers like the Daily (Hate) Mail drag you down! You're right to fight for better working conditions (or at least to prevent a further deterioration). I for one don't go on Virgin Atlantic anylonger because I know that their arguably superior service is paid for by greedy ol Richard Branson's miserable pay conditions for his staff.
at December 17, 2009