What is it with 'these' people? 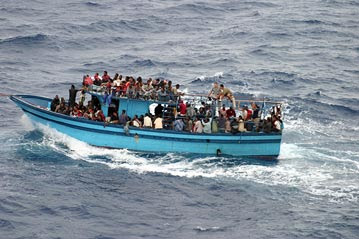 I don't get it! There have been reports this week that 'illegal' refugees who tried to cross into Italy from Libya's coast were left to die when their little boat ran out of gas, food and importantly water three days into their journey. Only about 5 out of a total of 80 made it. The others died eventually because they drank sea water, starved etc. The survivors were picked up eventually by the Italian coast guard. They told journalists that several ships passed them by and ignored their pleading. One even dropped a bit of water to them and disappeared thereafter.

How can people call themselves civilized who choose to do nothing at all to prevent almost certain death of other human beings when their direct and immediate action could have prevented such a harm from occurring? Surely the cost of taking the refugees on-board would not have fallen into the category of overwhelming burden or serious risk to one's own life. They could have even radioed the Italian or Libyan coast guard to pick those dying folks off the seas, yet these seafarers chose to do nothing at all.

ps: I'm not even going to comment on the US health care debacle. How daft can people be and still be taken seriously ...
at August 21, 2009