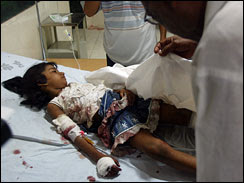 Fair enough, I am an atheist, so you'd probably expect me to pounce on the carnage currently going on in India. In case you've lived in a cave or had no access to the world for some other reason: a bunch of Islamic militants have, among other things, attacked tourists at hotel pools in India's largest city, Mumbai; in reportedly selfless acts of Islamic martyrdom they also threw hand grenades into crowds of passengers waiting to board their trains in the city's main railway station. These brave warriors even succeeded in murdering a bunch of Jewish people in a synagoge.

I can see already the voices saying that we should not confuse that wonderful peaceloving ideology of Islam with these murders. After all, there's another billion of Muslims who just don't do these things. Indeed, Muslim organisations the world all over have quickly condemned these attacks - as they well should have.

My problem with this analysis is that it is both correct, and clearly seriously flawed. At this point in time we have substantial numbers of Muslims thinking nothing of killing unarmed tourists, train passengers, cartoonists, office workers in the world trade center, commuters on trains in Spain and the UK, as well as fellow Muslims, all in the name of Islam. Well, here's my problem, IF that religion was as peaceloving as its adherents routinely claim it is, how come it routinely motivates quite some of its followers to commit mass murder of innocents? How can it be explained, if the ideology of Islam really has nothing at all to do with the continuing carnages the world all over, that not similar carnages are being committed in the name of the unitarian church or the metropolitan community church or in the name of atheism?

If Islam is being misused here by fanatics, one would surely expect that atheism or humanism would also be misused by fanatics to kill - say - religionists. Yet, this never seems to have happened, at least to my knowledge. Naturally, this makes me wonder whether the obvious correlation between Islamic faith and a growing number of crimes against humanity might actually be more than just a coincidence.

In case you're in doubt about the militants' honorable motives: reportedly they carried out the attacks in order to stop further Hindu violence against Muslims in India. I think we can be confident that they have successfully achieved the opposite. No doubt, innocent Muslims will suffer at the hands of vengeful Hindus, and so the inter-religious violence will happily continue, only briefly interrupted by on-and-off random killings of tourists at their hotel pools.

I just saw the other week the movie RELIGULOUS with Bill Maher. I thought it showed quite nicely how monotheism breeds intolerance and hatred. The current outpouring of Islamic barbarism is not that dissimilar to the barbarism committed by Christians during the crusades. The only surprising thing really is that this is happening in the 21st century. Even more surprising that there still seem to be people who think religion got nothing to do with it. Religions are at the heart of the problem. The sooner we get over them , the better we will be for it
at November 28, 2008