Hitler was a vegetarian, Stalin an atheist, Osama bin Laden a Muslim 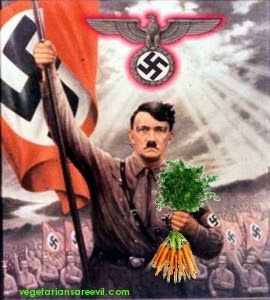 I am sure you all at one point or other have heard (or, worse, deployed) an argument like this: Hitler was a vegetarian, ergo something got to be wrong with vegetarianism (vegetarians are probably all more or less on the verge of becoming genocidal mass murderers); or: Stalin was an atheist, ergo atheism is responsible for the pogroms Stalin presided over; or: Osama is a Muslim, ergo Islam is responsible for the mayhem currently taking place all over the world.
It will not come as a great surprise to readers of my blog that I am quite content with exonerating vegetarianism and atheism, but I am uncertain as to Islam. The reasons for this are fairly simple, neither Stalin nor Hitler used atheism or vegetarianism (respectively) as their ideological rationale trying to justify their murderous activities. Say, Hitler didn't go about saying, 'because I think eating animals is unethical, I think we should slaughter plenty of Jewish people'. These two things were unrelated. The same is true for Stalin. Stalin also did not justify his mass murder with reference to atheism. He murdered millions of Russians for entirely unrelated reasons.
The same, however, cannot be said with regard to Osama bin Laden (and many like him), whose main frame of ideological reference and justification for their continuing terrorist activities is indeed their religion - Islam. The same holds also true for fundamentalist Christian fanatics who have killed people working in reproductive health facilities in the USA.
So, the argument that Stalin was an atheist and that therefore atheism is a bad thing is false, while the argument that Osama bin Laden is a Muslim and therefore Islam is a bad thing cannot be brushed away in the same vain. One would probably have to show that Osama bin Laden's interpretation if Islam is false, which does not seem to be easily done, or else he would not have the number of followers he seems to have all over the world.
at January 06, 2008