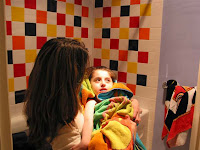 A case has been reported from the USA where parents have their severely disabled off-spring injected with hormones to prevent her from growing. Their main motive is their child's well-being. If their child would grow to that of a normal adult the parents would be unable to care for her properly. Here's a link to the parents' website explaining why they're doing what they're doing. The facts as they are reported on the parents' site have been vetted by bioethicists with a professional background in pediatrics and have been confirmed to be true. Their findings were published in a peer reviewed journal in 2006. I find it difficult faulting the parents for their choice. One of my colleagues, Hugh McLachlan has. His arguments can be found here.

Here is an excerpt from a commentary made by Douglas S Diekema (MD, MPH) from the Treuman Katz Center for Pediatric Bioethics in Seattle. His views pretty much summarise what I think about this matter.

'Joel Frader pointed out something that many others have, which is that perhaps this treatment misses the point because it doesn't focus on the failure of society to support these familes. While I totally agree that many families who have children with disabilities are left adrift and unsupported in the US, and I would further agree that represents a huge problem, I would nonetheless suggest that the issue of societal failure to support many families who have children with disabilities is a separate issue. First, to argue that this kind of treatment should not have been offered because the real issue is that society needs to provide support doesn't really help these families. The fact is that society doesn't provide many of them the support they need, and it's not clear that refusing to offer them options like this (when appropriate) changes that fact--it simply leaves them with no societal support AND no options like this one. Second, this family did not seek growth attenuation because they lacked support. The parents concerns would not have been addressed by full support. They were not driven by a feeeling that this was the only option they had left, but by the sense that the option of growth attenuation acheived their goal of optimizing quality of life better than any other solution. Buying them a mechanical lift or full time nursing care wouldn't have changed the fact that having a smaller daughter would mean they would be able to lift her, carry her, hug her more easily, and take her places more
easily.'

On Sunday January 07, 2007 the OBSERVER newspaper published a thoughtful commentary on this case and the debate surrounding it.
at January 05, 2007