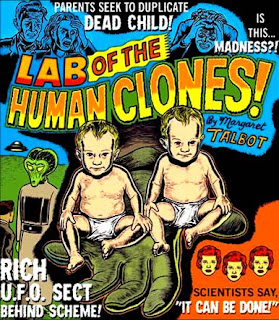 The reproductive cloning debate was undoubtedly 'won' by Luddites. You can tell already that I do believe that the other side of the argument deserves our support. What interests me in this context is how a slippery slope argument has been deployed by my learned Luddite friends against therapeutic cloning research. Of course, the Luddites have long been railing against therapeutic cloning research because it relied on the destruction of human embryos. Virtually all of these embryos are surplus IVF embryos (ie they would have been flushed down the sink anyway). I never understood the logic of this argument, because the embryos in question were at a developmental stage of about 10-14 days after conception. There is no central nervous system, brain, suffering, nothing in other words that should make us pause and ask whether the destruction of such an embryo is something to be concerned about.

There are two problems with this argument:
Of course, none of this suggests that reproductive cloning should be a research priority (there is bigger fish to fry on the health front, just think TB, Malaria, HIV). In fact, considering the millions of orphans in need of loving homes, this pre-occupation with having our 'own' genetically linked kids has always struck me as obscene. However, from this observation it doesn't follow that therefore we should outlaw reproductive cloning.
at March 16, 2007